Not all hackers are bad guys. After all, a hacker is simply someone who figures how to repurpose a tool, a gadget, or a device to carry out a task the object wasn’t designed to do. Steve Wozniak was a hacker before he co-created Apple. Tesla, Turing, and DaVinci, are all hackers in their own right.

But the bad guys, or Black Hat hackers as they are referred to in the Nat Geo show, have become much more famous. They are the ones we see in movies and read about in books. While we know there are good guys, or "White Hats"(once again their words, not ours), many of them operate with little fanfare or public recognition.

In tonight's Breakthrough on the National Geographic Channel at 10pm EST/ 9pm CST, you will see Pwnie Express InfoSec Ranger Jayson E. Street help educate the general public on just a few of the dangerous facing all of us in the connected world we live in today.

Breakthrough’s cameras follow Street into a bank he was hired to hack. We get to see him, Darren Kitchen, and Khalil Sehnaoui plan the attack, study the target’s vulnerabilities, design the physical and digital tools they need, and then infiltrate the bank.

“Every organization is vulnerable in some way,” Street says. “The more they fortify one way to gain access, the more likely we can find a foothold somewhere else. ”

The InfoSec community has known about Street’s work for years. He’s also been featured in news stories and in Pwnie Express videos, but the Breakthrough episode shows just how exposed and vulnerable even highly secured and regulated organizations are.

"The connected nature of our business and personal lives,  increases efficiently and productivity, makes the consumer experience delightful, but also makes things much easier for attackers".

Stay tuned after the show on Wednesday, for a one on one conversation with Jayson where we breakdown the episode in detail.  Got a question for Jayson? Just Tweet us @PwnieExpress with #askinfosecranger and we will be sure to answer your questions.

Jayson may be a good hacker but black hat hackers are out there – taking over vulnerable devices and breaking into your company without you ever knowing. Enter: The Internet of Evil Things. Arm yourself with education – download our 2017 Report on the state of connected device concerns. 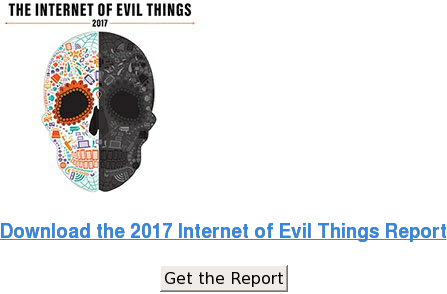 hack
IoT Hacking of Web-Connected Devices Gets Easier
Google is king when it comes to interoperability and extending the functionality of the web. But now those perceived benefits could be impacting our IoT security. Recently Google developed and...

hack
Hospitals Pwned with Obsolete Malware - KillDisk
Hospital administrators read the news. They know that their industry is the most popular target for hackers by a huge margin. Therefore, many hospitals are upgrading their defenses—but it doesn't...

hack
Wireless Attacks You Could Prevent in 2017
You know by now that even the most exacting standards for WIPS/WIDS deployment can't prevent a wireless attack. But with the right tools, you can detect them, and as we're all aware, detection is the...